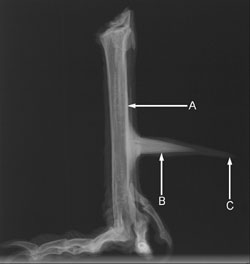 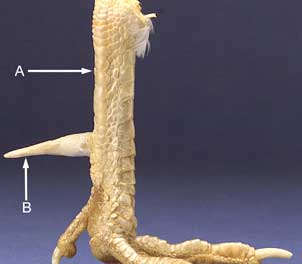 Can the spur be removed?
The spur papilla can be removed when the rooster is still a chick. A veterinarian uses electrocautery to hinder the growing cells of the spur papilla. Since the bony core is not fully developed, the process is quick, non-invasive, and the bird recovers well. Removing the spur from an adult rooster is a more invasive procedure, because it involves the amputation of bone. The rooster is anesthetized, and a bone saw is used to cut the spur at its base from the tarsometatarsal bone. The skin has to be sutured over the wound and the area needs to be kept clean. Postoperative infection of the bone is a possible complication.

Aggressive Roosters:
Roosters that are part of backyard flocks can be dangerous if they still have spurs. Injuries to children, pets, and other chickens are likely if your rooster is aggressive. Increasing the size of your backyard flock to include more hens and roosters may subdue the aggressive rooster because chickens are social birds that need to form a structured social order. Adding more birds to the flock will allow the rooster to establish a pecking order among its own species, instead of among other animal species, including humans.

Another recommendation is to file down the tip of the spur with a dremmel or other grinding instrument. Since the spur continuously grows, like the toe nails, this procedure will have to be repeated as the spur tip grows out. If these recommendations do not improve the flock situation, a veterinarian may perform surgical amputation of the spur. Since this is an invasive procedure, the humane use of anesthesia and postoperative pain relief should be included in the surgical protocol.

Bake a medium sized potato in the microwave until fairly soft (about 8-10 minutes). When the potato is ready, cut it in half crosswise and impale half on each spur all the way to the shank of the leg. Leave them there for 1-2 minutes. The heat and humidity will soften the "horny, keratinized layer" on the spur (see photo above). Using gloves, one at a time, grab the spurs firmly and twist off the hard outer layer. It should come off fairly easily. This will leave the calcar which is soft and not dangerous. The hard layer will grow back, so this procedure will have to be repeated