Why does my hen lay double yolkers nearly every day and is it normal?

It's not normal. Double yolks are a "mistake" in the chicken's reproductive system that sometimes happens when a hen just starts laying eggs and her system is still trying to figure out how to do it correctly. It may also be hereditary. Looks like your hen falls in the latter category.

DOUBLE YOLK EGGS:
Double Yolkers appear when ovulation occurs too rapidly, or when one yolk somehow gets "lost" and is joined by the next yolk. Double yolkers may be by a pullet whose productive cycle is not yet well synchronized. They're occasionally laid by a heavy-breed hen, often as an inherited trait.

The photo below shows a normal guinea egg on the left and a double yolk guinea egg on the right. The double yolker weighed just over 2 ounces. It's the only double yolk guinea egg we've ever gotten in the 3 years we've been raising guinea fowl. It was laid 23 September 2003 and was one of the last guinea eggs laid before they stopped laying for the winter. The egg was 5 months old when this picture was taken and the insides were too dried up to photograph, but there were two yolks in there. Maybe next time... 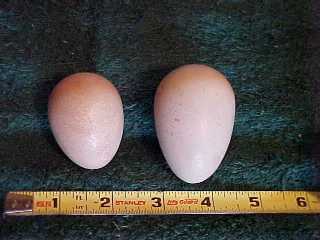 NO YOLK:
No-yolkers are called "dwarf", "wind" [or, more commonly, "fart"] eggs. Such an egg is most often a pullet's first effort, produced before her laying mechanism is fully geared up. In a mature hen, a wind egg is unlikely, but can occur if a bit of reproductive tissue breaks away, stimulating the egg producing glands to treat it like a yolk and wrap it in albumen, membranes and a shell as it travels through the egg tube. You can tell this has occurred if, instead of a yolk, the egg contains a small particle of grayish tissue. In the old days, no yolkers were called "cock" eggs. Since they contained no yolk and therefore can't hatch, our forebears believed they were laid by roosters. This type of egg occurs in many varieties of fowl. We've found them in chickens, both standard and bantams, guineas and Coturnix Quail (about the size of a small marble). 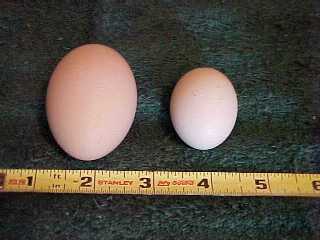 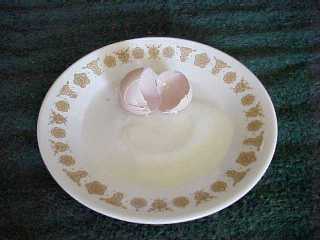 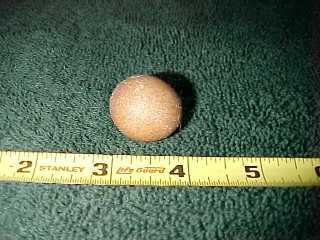 The above is a Pearl Guinea fart egg, very dark in color and less than 1 inch wide, laid in August, 2004.
It's the only Guinea fart egg we've seen since we started raising Guineas.

MORE THAN TWO YOLKS:
Occasionally, an egg contains more than two yolks. I once found a pullet's egg that contained three. The greatest number of yolks found in one egg is NINE. Record breaking eggs are likely to be multiple yolkers. The Guinness Book of Records lists the world's largest [chicken] egg (with a diameter of 9 inches/22.5 cm) as having five yolks and the heaviest egg (1 pound/0.45 kg) as having a double yolk and a double shell.

NO SHELL:
Every once in a while we get an egg with a membrane, but without a shell. It feels like a water balloon. This is another accident of the hen's reproductive system and is not necessarily an indication of any problem. The membrane was placed on the yolk and white, but it somehow slipped past the "shell mechanism" and the shell wasn't deposited. The photo below (left) is of an egg without a shell laid by one of our Barred Rock hens on 15 September 2004. The photo was taken 3 days later and the membrane had already begun drying up. The photo on the right was sent by Jen Peters of Mendocino County Calif. It was freshly laid by one of her chickens in mid-June, 2010. You can see right through the membrane. 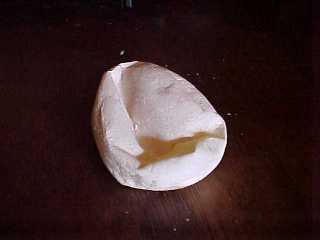 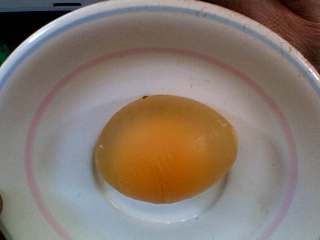 EGG WITHIN AN EGG:
An egg within an egg, or a double shelled egg appears when an egg that is nearly ready to be laid reverses direction and gets a new layer of albumen covered by a second shell. Sometimes the reversed egg joins up with the next egg and the two are encased together within a new shell. Double shelled eggs are so rare that no one knows exactly why or how they happen. The photo below was provided by one of our website visitors, Michelle Byerly, of Jasper, Texas. The bowl is a standard single serving cereal bowl. The egg was laid either by a Buff Orpington or a Black Australorp in early 2004. The egg found inside the other had no yolk (fart egg). 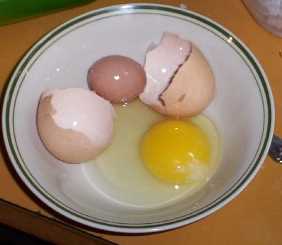 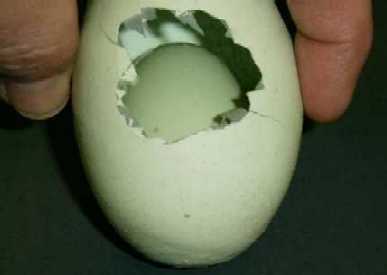 ODD SHAPED EGGS:
This happens from time to time and is just an "accident". The long, thin egg below was laid by one of our Barred Rock hens in June, 2004. It is over 2 1/2 inches long and less than 1 1/4 inches across the middle. 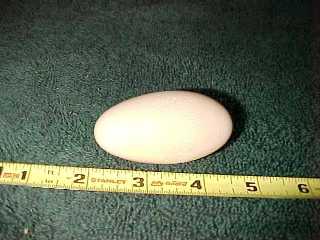 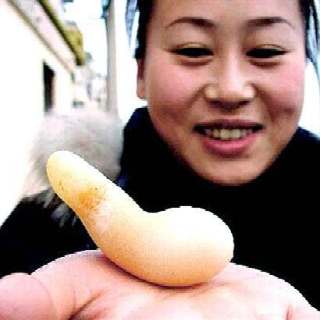 A Chinese hen has produced a spoon-shaped egg. The hen is owned by Huang Yazhou, a railway worker from Huaibei city, Anhui province, reports Chinanews.com. One morning, Huang awoke to hear the hen, which he bought from a market two months ago, making weird noises. When he checked, Huang found the hen had laid a spoon-shaped egg, 8.5 centimeters long and 35 grammes in weight. Huang said he had never seen an egg like it before in his life. 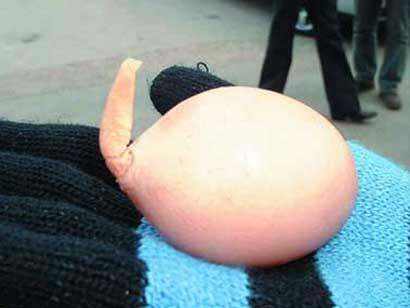 An egg in China has been found with a tail. The egg, found by chef Wang at his restaurant in Anyang city, Henan province, is normal size, but has a tail that is 3 cm long. It is not known why the egg has the tail reports Dahe Daily. Wang says he wants to hatch the egg and see what will come out.

WORMY EGGS:
Wormy eggs are extremely rare, occurring only in hens with a high parasite load.  Finding a worm in an egg is not only unappetizing, but is a clear indication that you are not doing a good job in keeping your hens healthy and parasite-free.

SHELL DISCOLORATION:
This is fairly common and occurs most often in brown eggs.  The pigment is sometimes deposited on the egg unevenly during production resulting in one end being a light tan and the other a darker brown.  The large end usually has the darker color. The deposit of the pigment rarely forms a recognizable pattern (like seeing shapes in clouds).

OFF FLAVOR:
Off flavor eggs may result from something the hen ate or from environmental odors. Hens that eat onions, garlic, fruit peelings, fish meal, and fish oil will lay eggs with an undesirable flavor. Eggs can also absorb odors that translate into unpleasant flavors if they're stored near kerosene, carbolic acid, mold, must, fruits and vegetables.